Our CCTV Buyers Guide is designed to assist end users, both residential and commercial, in the process of purchasing CCTV security cameras and systems. This article is a brief overview of the points discussed within the entire guide. To find out more about a section you’re interested in, click on the embedded link.

In this guide we will answer the following questions:

Here at Jim’s Security we have a wide range of CCTV packages starting at $1495 and offer professional installation of customer supplied CCTV systems from just $150 per camera. To find out more, visit our CCTV & Camera Systems page.

We are also readily available to help answer any questions or queries you may have about finding a security system tailored to the specific requirements of your home or business and lifestyle. Contact us on 131 546 or book a free onsite quote online.

The sensor, also known as the imager, is an internal component of the camera that consists of a grid of pixels, known as photosites. These pixels capture intensity of light entering the camera in order to record information about what is being seen through the lens. Once recorded, this information is then transmitted to the camera’s processor. Typically, the more photosites a camera has on its imager, the higher resolution the camera’s footage will be. In most cases, a bigger sensor contains more photosites, and therefore is able to capture more information than a smaller one, resulting in higher resolution images.      Source: Prototypr.io Higher resolution video and images enable you to capture footage in greater detail and allow for enhanced zooming capabilities (after the recording has been made). High resolution cameras, such as Ultra HD cameras, are great for recording in large car parks, stadiums or crowded bars. However the trade off with high resolution (e.g. 8MP, 6MP cameras) is that the products are generally more expensive and the recordings take up more storage space. There are also implications for the quality of night vision, as the best low light cameras are often in the 4MP to 5MP range. Our selection

Lens Types There are two main CCTV camera lens types: fixed lens (aka. monofocal lens) and varifocal lens (these include motorised lenses).  A CCTV security camera that has a fixed lens is permanently set, meaning that its angle of view, focal length and level of zoom cannot be changed. PTZ Cameras are an example of a popular camera form that include a varifocal, motorised lens. On the other hand, a CCTV camera with a varifocal lens will allow users to adjust the camera’s focal length, and consequently its field of view and level of zoom. This means that the lens can zoom in to capture a close view from a long distance (reducing the Field of View, but providing a clearer image of details such as licence plates, or perpetrators’ faces), or zoom out to capture a wide area (increasing the Field of View). Motorised vs Manual Zoom Lenses Most varifocal CCTV security cameras are equipped with motorised zoom lenses, however some varifocal cameras are manual. This means that they must be manually adjusted to change the camera’s focal length. Business Application:  For business applications, it is recommended that you opt for a motorised zoom lens if your budget allows. This lens

The transmitter is the part of the camera that sends video to the recorder or viewer’s device by either converting it to Ethernet in IP cameras or into a HD-CVI analogue format in analogue cameras. In IP cameras transmission happens internally – these cameras only require a local area network to send information. Whereas, in analogue video surveillance systems, cameras need to be connected to a DVR with coaxial cable in order to transmit information. Image sourced from: Visual Verification Systems Inc. Comparing Analogue and IP Cameras IP Cameras Analogue Cameras latest/current technology seen as ‘traditional technology’ includes advanced analytics such as facial and licence plate  recognition limited access to advanced analytics, as many of these features are processed at the level of the camera (not possible with analogue cameras) sends signals over cable to be stored in  a NVR, or can work wirelessly sends video over cable to DVRs, or in  some cases can work wirelessly (wireless analogue cameras often have compromised resolution) use Cat5e cable Ethernet cables such as Cat5e are thinner and more flexible than coaxial cables, and can be easily run in tighter spaces PoE (Power over Ethernet) networking feature allows Cat5e cables to carry electrical

Infrared Cameras Infrared light is light that we cannot see ourselves but rather feel as heat. As the prefix ‘infra’ means after, the term ‘infrared‘ refers to the idea that we cannot see light with a wavelength ‘after’ (or longer) than that of the colour red. IR cameras use this invisible light to ‘see’ and are often referred to as ‘night vision’ cameras. However, this is a common misconception as most IR CCTV cameras have inbuilt infrared technology, allowing footage to be captured during the day and at night. Example of infrared camera footage In low-light, these cameras operate using built-in IR LEDs, which emit infrared light. This ‘invisible light’ is then reflected by objects and collected by the camera lens. As such, the number of built in IR LEDS in a CCTV camera influences the camera’s night vision range, and will also impact the resolution of your footage. Many CCTV cameras contain up to 24 LEDs. When light is available the camera will usually give you a coloured picture, however, as it gets darker the IR will switch on and the camera will begin to record in black and white using the light generated by the IR. IR technology

Wired Cameras Wired cameras are hard wired to a DVR or NVR recorder to store and view the security footage. They are wired using coaxial (analogue) or Cat 6 (digital) to the recording device. Analogue will often require a separate cable to provide power to each camera,  digital cameras receive power via Cat 6 (ethernet) cable.  The NVR/DVR also needs to be wired to your router or modem to provide an internet connection for remote viewing. We strongly recommend hard wired CCTV for our customers as wireless and wire-free are less reliable due to battery life and wireless data transfer limitations. Wire-free These cameras are battery powered, meaning that they are 100% cable free. Wire-free cameras are relatively cheap, however are often less effective than their wired counterparts due to poorer video-quality. The batteries of a wire-free camera will also need to be replaced regularly. In general products in this category are DIY and not professional grade security. Image sourced from: Arlo Wireless cameras Despite their misleading title, these cameras still need a power cord. However, they require less cabling than your traditional wired camera. Once again products in this category are generally DIY. Image sourced from: Arlo Here at

Bullet Cameras Bullet cameras, named for their iconic shape, have a distinctive appearance that is highly recognisable to intruders. These cameras are renowned for acting as an effective visual deterrent. Strengths Weaknesses Highly visible, provides surveillance which is obvious to intruders (acting as a visual deterrent) Generally, have longer range than domes Outer casing protects against harsh weather and factors such as glare and rain Easier to knock out of position than a dome camera Ideal for: Monitoring the exterior of your business Protecting the perimeter of your property, especially if you have a large driveway or backyard Installation on hard to reach places (so it can’t be knocked out of place) Installing on walls or eaves Focusing on entry and exit points Dome Cameras Dome cameras are cameras encased in an ‘outer dome’, protecting the camera from tampering and vandalism. The main benefit of this camera form is that it is difficult to determine where the camera is pointing. Strengths Weaknesses Discreet, not immediately apparent to intruders Dome casing makes it difficult to see which direction the camera is pointing Able to monitor wide angles Allows you to view multiple directions with one camera Can be mounted vertically or

What are CCTV Video Analytics?

Some high end NVRs often offer inbuilt ‘smart analytics’. These analytics analyse two key components of security footage: motion and pattern, and convert this information into data. Some CCTV cameras may also have their own inbuilt analytics. Brands like Hikvision, Dahua and Swann Security all have cameras in their range that offer this feature. Video analytics have a wide range of applications in a business setting. For example, they can be used to count the number of customers entering and leaving a business on a given day, to evaluate the demographic profile of customers or even look at their customers’ path patterns and dwell time within a store, and the list goes on. Dahua calls this technology IVS (intelligent video systems). In addition to providing businesses with useful data, CCTV video analytics also have a wide range of security features, for example: facial and number plate recognition (to keep past offenders out of your business) tripwire camera tampering detection alarm activation perimeter protection motion tracking deep learning algorithms (allowing AI to ‘learn’ and understand the environment, and quickly respond to changes e.g. alerting authorities) Image of Dahua IVS tripwire activation  Video analytics reduces the cost and time of outsourcing the collection of

Bandwidth and Storage When it Comes to CCTV

Bandwidth refers to the amount of data that can be transferred from one point in a network to another (e.g. from a camera to a NVR or DVR) per second. While Storage is the capture of this data on your NVR/DVR, usually measured in TB (Terabytes). One TB is equal to 1,000,000 Megabytes (about 500 hours of SD Video). Planning the bandwidth and Storage requirements of CCTV cameras is as important as where the cameras are placed. This is because the network is limited by the amount of traffic it can carry and store – as such a system that does not have an adequate amount of bandwidth will take more time and have more issues when sending through footage. Running out of bandwidth on your network will pose connectivity issues (video may freeze and drop out), and have a negative impact on the footage’s resolution and overall quality – potentially inhibiting the recording of critical incidents. The amount of bandwidth needed for a CCTV camera directly relates to the camera’s video quality. Generally, the higher the quality, the higher the bandwidth and need for storage space. Factors that influence bandwidth are:  image resolution (MP) frame rate (30 frames per 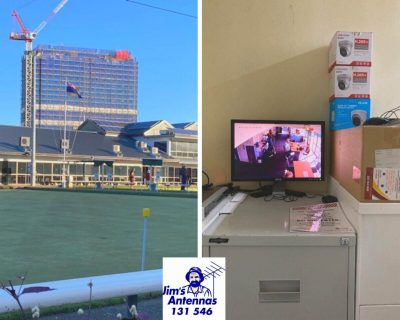 The team at Jim’s Antennas works closely with Jim’s Security to assist clients with the installation and repair of CCTV Systems & Security Cameras, Security Alarms, Video

No matter where your property or office is located we are here to help. In fact, one of our Franchisees, David from Jim’s Antennas Horsham, 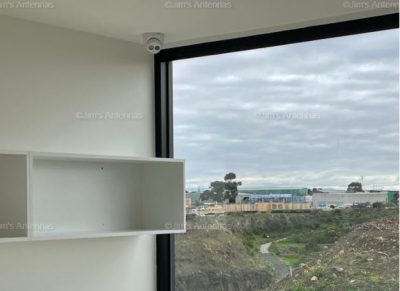 Is Your Building Site Protected From Vandalism?

Is your building site protected from vandalism? Whether you are building your own home or are in charge of a building site, this is an