Do I Need Any Qualifications or Licenses?

No experience or qualifications are required to start your Jim’s Security Franchise. We will provide you with guidance and support in obtaining all relevant security licenses to operate your franchise. All new operators start with an intensive 8 week training program consisting of training and development with Jim’s Group & Area Managers, short education courses and supplier/manufacturer training with a pathway to becoming an ASIAL certified security technician.

Is Security the Right Industry? Will I Get Enough Work?

ASIAL (Australian Security Industry Association Limited) predicts there will be an annual growth of 3% between now and 2026. For an 11 Billion dollar industry, this presents a huge opportunity for Security Professionals. In 2021, despite the numerous interruptions and uncertainties of the Covid-19 Pandemic, Jim’s Security generated over 9500 Security enquiries for its franchisees.

Why Would I Want to Own a Franchise, When I Could Establish My Own Independent Business?

Before investing in a franchise, many have found themselves asking, ‘why don’t I just start my own business and save paying the franchise fees?’.

At a higher level, starting a franchise business gives you a much higher chance of success. According to Dominique Lamb, CEO of the National Retail Association (NRA), 80% of independent small businesses fail in the first five years  – “that’s far higher than the 20% failure rate among franchisees”. With Jim’s Security, you’re in business for yourself but not by yourself. We encourage you to do your due diligence before applying to secure your own Jim’s Security Franchise. To assist, we’ve compiled a comparison between franchise ownership and Independent business ownership: 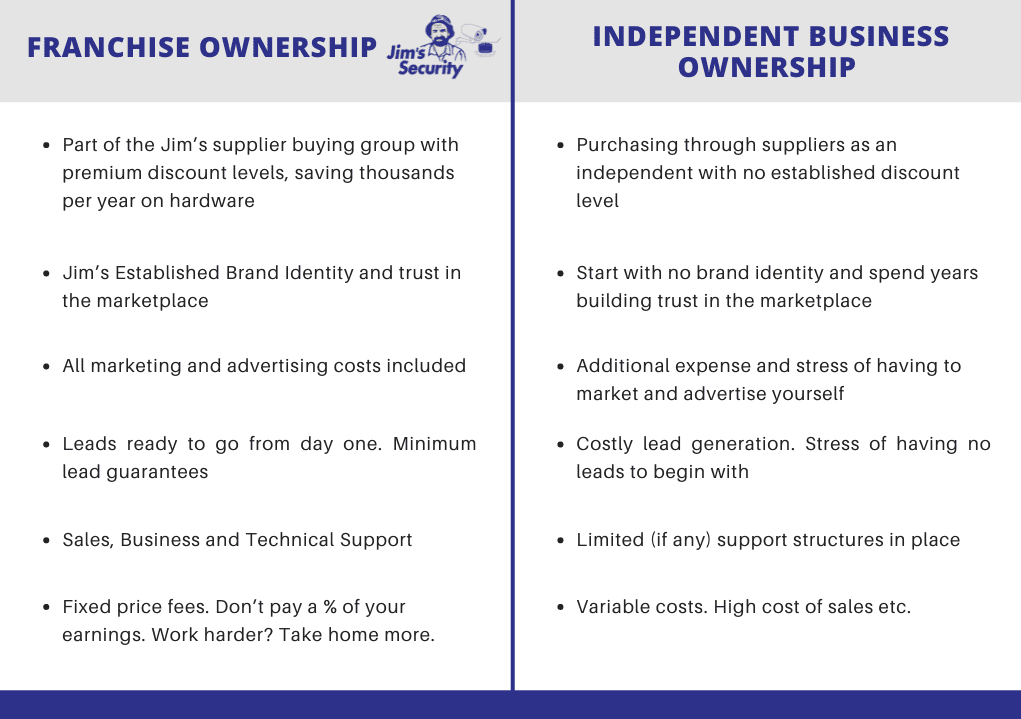 How Much Does it Cost to Start a Jim's Security Franchise?

The initial investment to establish your own Jim’s Security Franchise territory is $35K (which is an asset you will have the ability to resell should you ever wish to), while costs for training and core equipment are estimated are approximately $24K.

Start-up costs may be reduced if you already own some of the required equipment and/or have already completed some of the necessary training . A training rebate is also provided during the 8 week onboarding period, so you do not have to be without income during this time.  If required, financial assistance is available through Jim’s Financial Services.

What Are the On-going Fees I Will Have to Pay?

Unlike the majority of franchises in which fees are calculated as a percentage of sales, Jim’s charges a flat monthly administration fee. This fee includes all your marketing and advertising costs as well as your franchise fee.

The only variable fee is dependent on how many enquiries you take through the Jim’s system. The average cost per lead for one of Jim’s Security’s services is around $40.00. Most franchisees are able to pay off their monthly fees with the margins generated from one or two installations.

How Much Can I Make as a Jim's Security Franchise?

As the owner of your franchise, the potential earning of the business comes down to you. There are no limits on how big you can grow your business or what sort of income you wish to achieve. Being that it’s your business, you can set your own prices, navigate discounts and generate your own referral/contract work for which you don’t have to pay any enquiry fees. We will do everything we can to assist and support you in creating the level of income and lifestyle you want to achieve. We give our franchisees a competitive advantage over independently owned competitors through allowing our franchisees to:

How Do I Get Started?

Head to https://jimssecurity.com.au/become-a-franchisee/ and complete the form. Our team will contact you to discuss your enquiry, answer any further questions you may have and advise on next steps.